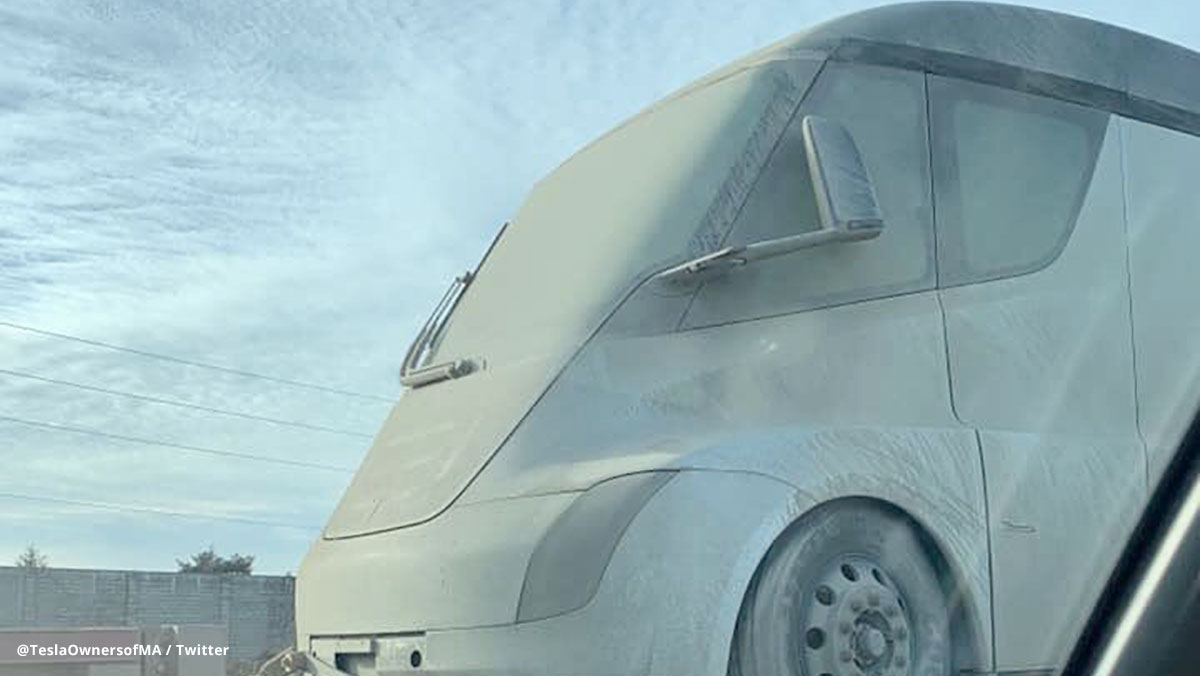 Both red and silver Tesla Semi Prototypes have returned home after rigorous cold-weather testing in Canada starting in February as we reported last month, as the intensity of winter loosens a bit, Tesla brought the trucks back to the United States.

Multiple persons saw the Tesla Semi prototypes in Massachusetts and Washington states as they rested on large semi-trailer beds — interestingly they were super dirty suggesting the long journey they have been traveling to get back to the Tesla HQ.

Around two days before both of these trucks were spotted in the United States, they were seen crossing the Haines Junction in Yukon — a Canadian village around 1,632 km (1,014 miles) away from the state of Alaska, where these trucks probably crossed the border and entered the US — in the following pictures posted on Instagram by @ytranger, these trucks look clean, so this dirt was not from the testing itself.

At the start of this year, Tesla Semi customers were sent emails hinting Tesla’s class-8 electric haulers production would start in the 2nd-half of 2020 but suddenly after the COVID-19 pandemic, this target would surely be delayed and no one is sure right now how long this situation curtails (see how Tesla and Elon Musk have been helping in the Coronavirus outbreak).

The same document also unveiled that the Tesla Semi trucks will be able to charge up to 1500V and 3000A — for comparison, a Tesla Model 3 on a V3 Supercharger loads current at 48A max, electrical engineers please input your thoughts in the comments section below.

Tesla Battery & Powertrain Day was originally scheduled in the start of April but might be delayed in the current scenario, the day when Tesla and Elon Musk are expected to unveil the battery technology used in the Semi for achieving 300 – 500 miles of range fully loaded and the secrets behind quick charging of the battery packs.

In the following video the YouTube channel Tvlog saw the red Tesla Semi Truck in Olympia, WA with the same amount of dirt on it and riding the trailer bed, he thought it was wrecked but it isn’t true, its been taken back to the Tesla HQ after detailed testing and most probably showcased to the reservation holder customers in the northern hemisphere like Walmart Canada who have an order of 30 Tesla Semis in place.

V3 superchargers are well above 48 A. Home chargers hit 48 A. https://cleantechnica.com/2019/03/08/supercharger-v3-shocking-power-smart-strategy-by-tesla-charts/ “…the 250 kW of peak power is delivered to a nearly empty pack whose voltage is likely somewhere in the range of 310–320 volts. Since watts is a function of volts * amps, to achieve 250 kW at ~315 volts, the peak current has to be somewhere close to 800 amps, which is unprecedented for EV charging! Geek forecasters were under the impression (on the basis of solid evidence) that the Model 3 had hardware limits of around 525 amps. Something approaching 800 amps (even for a… Read more »

I am so excited to see the dramatic progression of non-fossil fueled vehicles.
My goal is to transition from a totally unrelated field into renewable energies and electric automobiles. If there are any opportunities even at entry level I would love to capitalize on it now. Relocation is no problem!