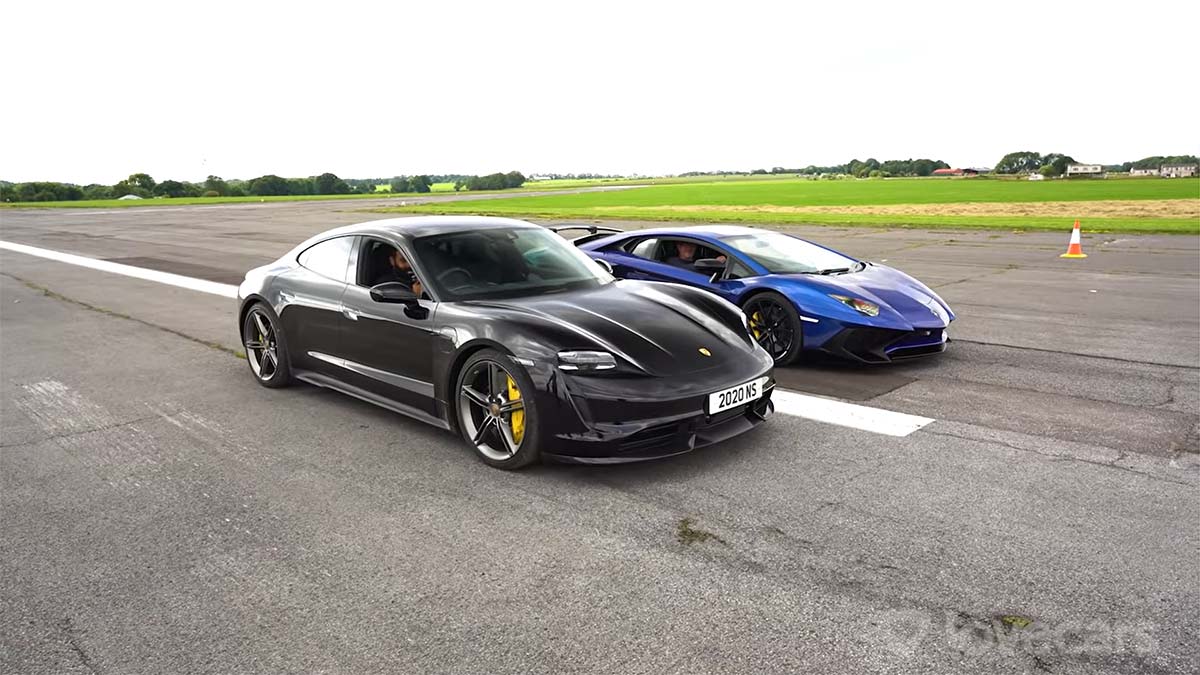 In this era of the electric car revolution, power is not directly proportional to the amount of roar an internal combustion supercar can make. Porsche Taycan literally crushed a Lamborghini Aventador SV in a 1/4-mile drag race. Welcome to the new world of car racing where family sedans and saloons kick some serious sports car butt.

YouTube channel LoveCars organized a drag race between a top-end Porsche Taycan Turbo S against a Lamborghini Aventador SV that’s loaded with a 6.2L naturally aspirated V12 engine. Massive power challenges the cruel silence of the Taycan EV and gets defeated. You can guess the sheer feeling I am getting while writing these words, gratifying, to say the least.

The official 0-62 mph (0-100 km/h) times of both of these monsters are identical i.e. 2.8 seconds but the results (below) show that the Lambo did not do its best 0-62 in this attempt. A poor launch maybe or the winds at the abandoned airport, I am not sure.

I have been an admirer of the Porsche Taycan design since its launch, especially when comparing it to the somewhat outdated Tesla Model S but the Lambo Aventador is a treat for the eyes too, however a bit small for people of my taste.

Let’s have a brief specs comparison of both these potent cars before racing on to watching the drag race video below.

Lambo Aventador also challenged the Tesla Model S Performance earlier this year and lost 2 out of three attempts at the race and 1 attempt resulted in a draw. Now losing to Porsche Taycan, the super famous Italian sports carmaker should worry a bit, maybe a lot.

Taycan might have a low number in terms of EPA estimated range but on the performance front, Porsche has created a masterpiece. With the hefty price tag and range anxiety in place, Porsche Taycan might not become a daily city car like the Tesla Model 3 but will be showing off its muscle on the race tracks for a long time to come.

It’s still not clear what strategy Porsche is working on to eliminate the low range element from an otherwise excellent car.