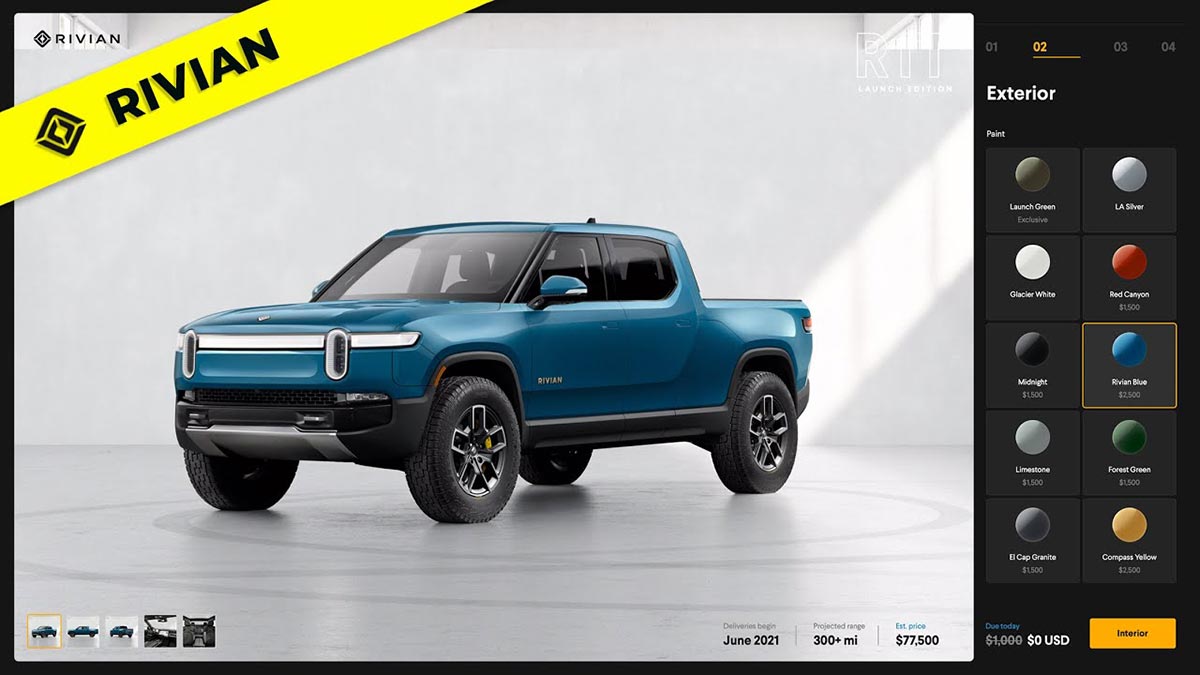 Rivian Automotive has opened the gates for its online ordering and vehicle configuration virtual studio for reservations holders, the ones who paid $1,000 as a pre-order amount. Reservation holders are able to place an order for their R1T Pickup Truck or R1S SUV.

Taking a look at the Rivian online configurator (pics & video below), the Tesla-inspired tech and user interface is pretty much visible, however, good things should continue, like the dealership-less sales and delivery model by Tesla, Rivian follows.

According to Rivian’s online configurator, deliveries of Launch Edition R1T are estimated to begin June 2021 and for the R1S deliveries start in August 2021. The other variants named Adventure and Explore are due January 2022 for both R1T and R1S.

Rivian is offering some attractive optional packages and wheels for its vehicles. For example, you can buy a $5,000 Mini Kitchen for the R1T pickup truck, which is installed in the vehicle’s gear tunnel (strategically placed horizontal open space between the back seats and the truck’s bed).

The magic of outdoor cooking, with all the essentials from home. Our Camp Kitchen helps you prepare complete meals wherever you are — easily, comforably and with a view.
Rivian

Both the Rivian R1T and R1S has the default range of 300 miles. For a whopping $10,000 you can purchase another 100 miles of range which is called the Max Pack with 400+ miles of range. The real adventurists will surely select the Max Pack if they have the budget for it as it increases the car’s ability to wander in the wilderness.

The 300-mile range stays the same for the other variants i.e. Adventure and Explore (Explore being the basic package, see below for pricing details).

Both the R1T and R1S come with the included Black Mountain interior accent, the brighter interior color choice is called the Ocean Coast which is optional to replace the default package. The upgraded interior is called the Forest Edge that includes brown wood trim and gray accents.

For the R1S SUV, Rivian is offering both the 5-seat and 7-seat configurations — more storage and more seating capacity respectively.

Rob from Tesla Daily took us on a joyride to a super-detailed walkthrough of the Rivian Design Studio (Online Configurator) in the following video.