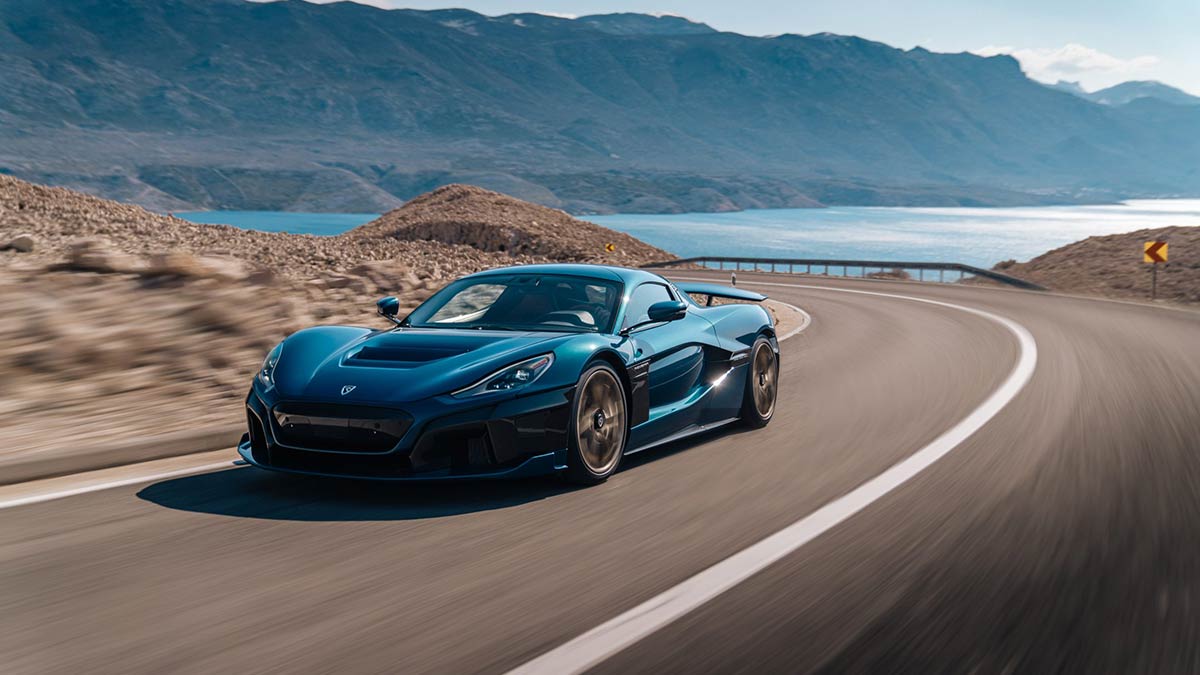 After working almost 4 years on its Rimac C_Two prototype electric hypercar, Rimac Automobili has finally unveiled the production-ready version of this car named “Nevera”. This name comes from a strong and powerful Mediterranean storm that unexpectedly hits the Croatian open sea often in summers.

Rimac Automobili CEO Mate Rimac has come a long way in putting an electric hypercar into production. He started this company about 10 years ago with the mission of making electric cars fun, exciting, and fast, he says in the latest Rimac Nevera unveiling video (below).

Nevera has some seriously impressive performance specs, with the massive power of 1,941 hp (1.4 MW) the car can go from 0-60 mph in just 1.85 seconds  — that’s even faster than the Next-gen Tesla Roadster with an estimated 0-60 of 1.9s (without the SpaceX rocket thrusters of course). Nevera’s 258 mph (412  km/h) top speed even goes beyond the Tesla Roadster‘s but it comes with a price tag of 2 million euros ($2.4 million) — we can actually buy 12 Tesla Roadsters with that much money.

About 4 years ago, Rimac unveiled a concept electric hypercar, the company called it the C_Two. This concept car then turned into 3 generations of prototypes until we finally got the Nevera which according to CEO Mate Rimac is just months away from production.

Rimac as a company had a humble start in Croatia that now has 1,000 employees working day and night to bring the best electric hypercar to its customers. According to Rimac, 18 total prototypes of Nevera have been tested around the globe for homologation and crash safety certifications.

Rimac Nevera is a completely new car built from scratch to the ground up. CEO Mate Rimac says that everything for Nevera is custom-built and nothing has been taken from any other car or brand.

Rimac claims that this is the largest carbon fiber monocoque structure of any production car.

evera’s groundbreaking monocoque, developed by the former C_Two Chief Engineer Daniele Giachi, includes a bonded carbon roof, integrated structural battery pack and rear carbon subframe, is forming the largest single carbon fibre piece in the entire automotive industry. Weighing less than 200kg and utilising 2200 carbon fibre plys and 222 aluminium inserts, the monocoque encases the car’s battery to form a compact yet incredibly strong structure with a torsional stiffness of 70.000 Nm/degree. The level of unmatched strength and safety this provides has contributed to the Nevera meeting strict global homologation standards, and delivering the most rigid structure of any car ever made.
Source: Rimac Automobili press release

The T-shaped structural battery pack of the Nevera consists of 6,960 cells and has a capacity of 120 kWh. This integrated battery pack enhances the car’s stiffness manyfold, the Nevera has a torsional stiffness of 70,000  Nm/Deg, “making it the stiffest structure of any car ever made,” Mate Rimac said.

The Nevera EV hypercar has multiple air intakes in the front and sides, and the spoiler of the car also dictates the airflow from the rear. When the rear spoiler is closed it restricts the airflow but when it is opened or tilted,  it generates more under-pressure at the rear and lets even more air out (see above graphic, animated demo in the video below).

This is a typical supercar-inspired interior but with the accessories of a modern electric car. Three screens are horizontally spread across the dashboard, the instrument cluster, foldable center touchscreen, and a small screen for the passenger.

Two giant knobs in the middle are for drive mode selection (left one) and customizing the drive mode even further (right one). This way expert drivers can set the rear and front powertrain and customize track and drift mode settings.

Another knob at the left of the steering wheel is for gear selection, an intelligent idea for this function as Tesla also removed the gear stalks on its new Model S cars and moved gear selection on the center touchscreen.

However, the Rimac design team did not want to shift everything on the center touchscreen in the name of innovation, they still kept the knobs for a mechanical feel, digital might not always be exciting.

Rimac is aiming to gradually ramp up production of Nevera to 1 car per week as soon as the automaker starts working on customer cars, this is good but are they going to get a customer each week for a $2.4M car? We asked Rimac for a reservation count on Twitter but did not get back a response from the company’s social media team.