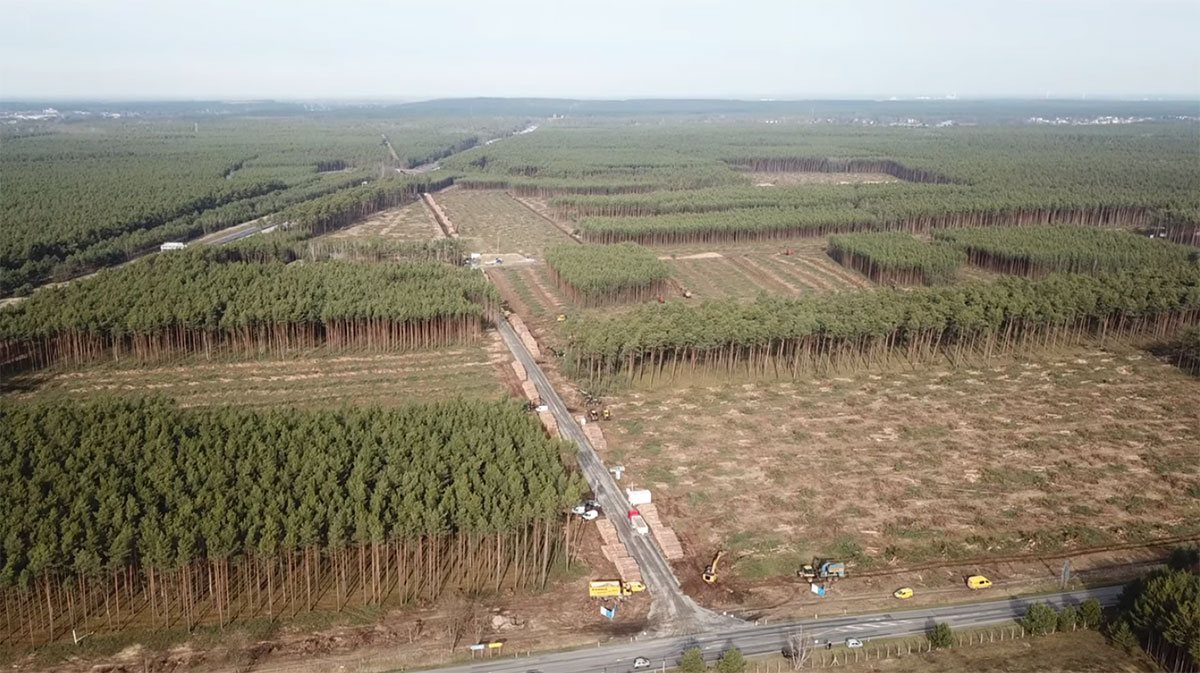 The work on tree plantation clearing at the Tesla Gigafactory 4 in Grünheide has been temporarily suspended by the Higher Administrative Court (OVG) Berlin-Brandenburg in response to an application filed by the Brandenburg Green League which is a local group of environmentalists.

The Green League thinks that by removing the trees, Tesla is doing much harm to the environment and the wildlife in the manually planted tree farm, yes it is not a natural forest and according to Tesla CEO Elon Musk’s confirmation on Twitter, the US-based automaker is willing to plant three trees for each tree is cut down during the tree felling process, also the entire 300 hectares (741 acres) of the land area is not required to be cleared of the trees.

This decision has come almost after one month after the Brandenburg government approved the land contract for the Giga Berlin construction site, although the final permission to start building the car factory is not yet been given to Tesla, the permission of site clearing and cutting down of trees was given by the German ministry for environment at ‘Tesla’s own risk’.

As we can see in the above video from two days ago that Tesla had cleared several areas of the plantation, this became the reason for the stay order that the German environmental activists acquired from the court of law, the administrative court mentioned that although this is a temporary halt but “the Green League’s request for legal protection is obviously hopeless from the outset”, reports the German news outlet Frankfurter Allgemeine Zeitung .

According to another German news source BILD,  to start the factory construction, only 92 hectares (227 km) of the tree plantation needs to be removed of which 47 hectares (116 acres) has already been cleared — Bild.de has posted the following latest satellite image marking the total required area for tree felling.

We still have no signs of nervousness at Tesla, but the mood can suddenly change…

Giga Berlin is bound to provide thousands of jobs to Germans and Europeans but issues like this can really extend the duration of the factory build-up or if problems in the near future persist, Tesla might consider getting out of the deal and that may be very damaging to Germany’s economy and deteriorate the country’s image in terms of ‘ease of doing business’.

Even if Germany follows half the speed of the Gigafactory Shanghai development, we would be able to see the Made-in-Germany Tesla Model Y compact electric SUVs being rolled off the assembly lines in late 2021 which is Tesla and Germany government’s initial goal.

Germany’s government had warmly welcomed Tesla to build one of its gigantic factories in the country in anticipation of the declining German auto industry that was unable to electrify their cars on time and with precision and in the shape of Tesla the country has a chance to accommodate many automotive sector jobs if the traditional automakers fail in the near future.