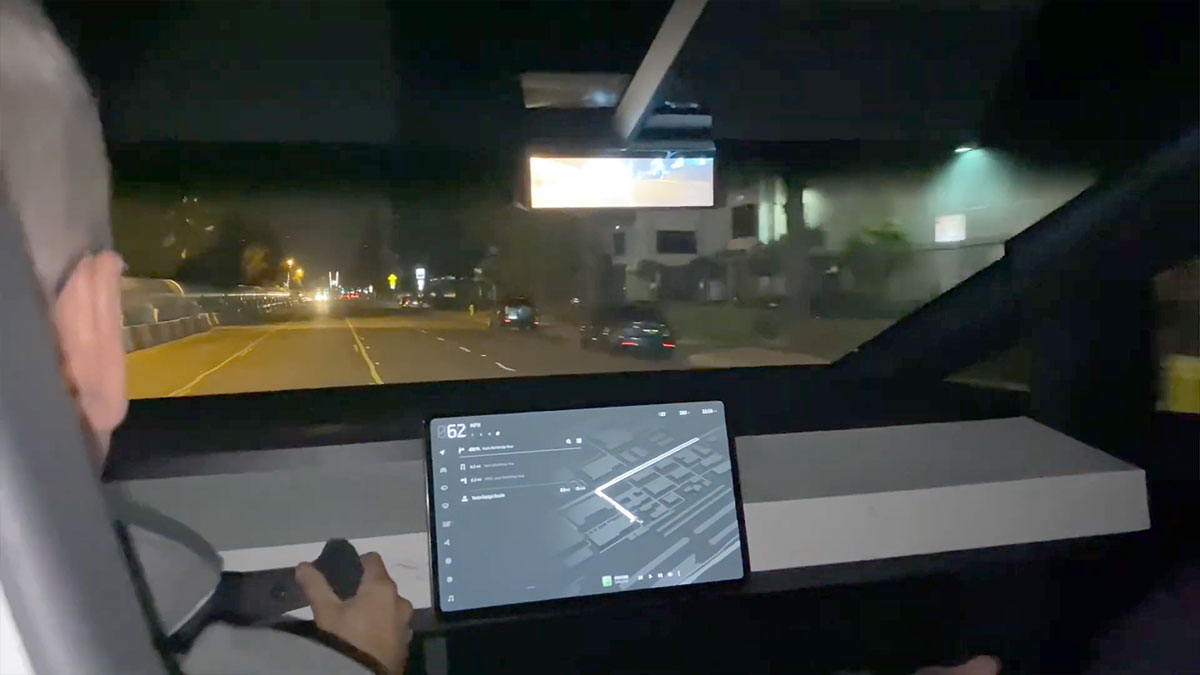 Tesla gave the Cybertruck unveiling event participants brief test rides after the presentation finished, the test rides started a few hours late because of the broken armored glass during the presentation, this resulted in many Tesla enthusiasts not able to get to sit in the futuristic pickup truck and experience it first hand.

While our co-author Ian Pavelko missed the opportunity, my friend Tom Sjötun and his friends were the lucky ones to get inside the cabin of the Cybertruck and shot the following video of their experience.

The Cybertruck test ride driver was a Tesla engineer as he tells Tom and the others, they also experienced a glimpse of its 0-60 mph while their guide floored the accelerator pedal, yeah nice it was.

Let’s talk about each interior component of the Tesla Cybertruck aka ‘the polarizer‘ as we see in test ride videos and the pictures that Tesla has released as part of the press kit. Although in 2 years’ time many changes are to be expected the prototype gives us the idea of Tesla’s design direction with this vehicle.

The Cybertruck’s steering wheel design is as untraditional as the rest of the truck is — but considering it is a prototype vehicle, this might not make it to production mostly due to regulatory issues. Tesla might have put it in the prototype in order to add another ‘cool’ factor to it, it does!

The design of the Cybertruck steering wheel is similar to the Next-gen Tesla Roadster‘s steering but the Cybertruck one has one ‘scroll wheel/ball’ on each side which first appeared in the Tesla Model 3 — this is to complement the minimalism of the entire cabin.

Several center touchscreen options and steering wheel tilt and height adjustments are controlled by the scroll-wheel, Model 3 has two, Cybertruck has one, Tesla aims to make it more simple, more!

As the Tesla engineer told in the above test ride video, the center touchscreen of the Cybertruck is 17 inches — 2 inches wider than the one that comes in a Tesla Model 3, a Model 3 sized screen would look so tiny inside the super roomy cabin.

The software running on the center touchscreen is definitely a non-public version, Cybertruck render on the screen, UI, and especially the navigation is very different from what we can see on a Model 3, S, and X.

The zoom-in and rotate feature was just introduced to Tesla Model 3 owners a few months ago but the zoom and rotate we witness in the above video is next-level, the navigation rendering even shows an aerial view and in 3D.

User Interface of the prototype Cybertruck is also totally different, the UI icons have been moved to the left-side vertically instead of the current horizontal setting at the bottom of the touchscreen, Silicon Valley influence is evident, vehicle software is one of  Tesla’s major edge over traditional automakers.

Although the seats of the Tesla Cybertruck might not look that big in the pictures but they are definitely not dainty as described by Elon Musk in one of his recent tweets — according to the Tesla CEO a person of the size of Andre the Giant or the Big Show can easily fit in them (fan of both these guys).

In Tom’s video above we can see the big guy in the front passenger seat is tugged in comfortably, we can hear him saying that he has kept a Toyota Tundra in the past and this looks even bigger than the cabin of that big truck, pictures and videos aren’t doing justice here.

The rear seats are also very comfortable as we can in Tom’s video, there is a fair amount of leg and knee room for the rear seat passengers, one of the roomiest cabins in its class, or the Cybertruck is in a league of its own? Let the time be the judge.

Sir, this will not be some a dainty little buttercup of a truck! Driver’s seat will be big enough to fit André the giant (love that guy).

There has been a divided opinion between the event participants taking a test ride in the Tesla Cybertruck about the dashboard’s material, some say it’s marble and to some, the texture feels like a  paper — but according to Tesla engineers via Ryan McCaffrey it’s a ‘special’ material they are not going to disclose right now.

Of course, the rearview mirror shows the camera feed because when the truck’s bed cover is closed there is no way to look behind through the rear window — even with the bed cover opened, the rear window is not big enough to give a great view of behind the vehicle.

Hopefully, the U.S. Department of Transportation approves this for the production version of the Cybertruck, with the rearview mirror showing camera feed, Tesla is moving in the right direction for the Cybertruck at least.

We can see the rearview mirror displaying the video clearly in the following test ride video by MacTechGenius.