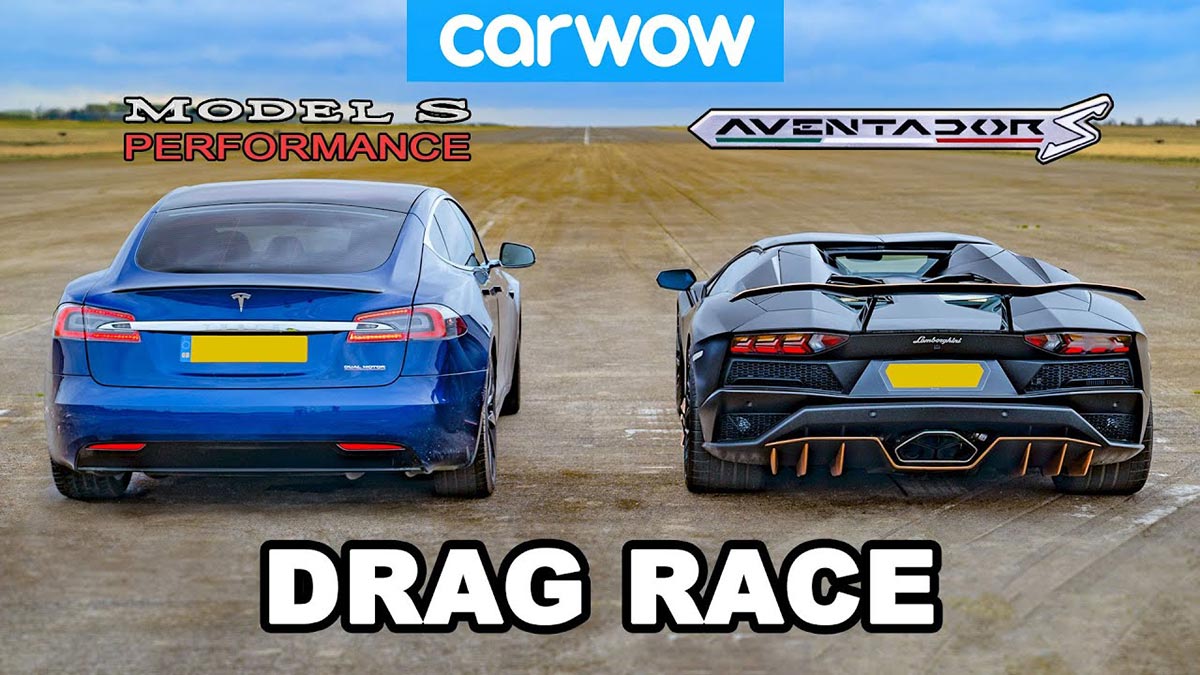 Yes! — a 5-seat family electric sedan takes on a built from the ground as a supercar in a set of drag races — the Tesla Model S P100D vs. the Lamborghini Aventador S Roadster, actually, you can buy 4 Tesla Model S Performance + a Tesla Model Y or Model 3 Performance at the price of one unit of this specific version of the Lambo Aventador (see Table 1.1 for specs and pricing).

As we can see in the side-by-side photo of both these drag race contenders, the Tesla Model S is comparatively bulky and large while the Aventador S Roadster is a compact sports car, the Model S is literally 1,377 lbs (625 kg) heavier than its challenger here but due to its 920 lb-ft of instant torque and a 0-100 km/h (0-62 mph) time of 2.5 seconds, it should be better off-the-line in a drag race over the Aventador.

Carwow who organized this drag race showed some specs of both cars on the screen but they mistakenly mentioned the Tesla Model S horsepower has 825 hp, in actuality its 525 hp and the Aventador has 740 hp of power hidden under its hood. Let’s go over some performance specs and watch the interesting and entertaining race video to form our opinions, the comments section is open for your thoughts below.

Yeah, the Lambo didn’t win a single race out of the 3 drag race attempts, it only won the rolling race and the brake test (the Aventador has some seriously expensive and super cool brakes for sure) — the super quick Tesla Model S P100D stole the show from the ICE monster, imagine what would the 1.9 sec Next-gen Tesla Roadster would do with such challenges? Send them to oblivion for good, we just have to wait a little more.

Wait, we will not have to wait for the Roadster to get into production, way before that the Tri-Motor Plaid Model S will be out there to ridicule such contenders who dare to call Teslas to the race tracks, not just in drag races.

It is not the first time a Tesla has taken on a Lamborghini in a drag race, in 2018 a Tesla Model X challenged a Lamborghini Urus on the dragstrip, boy that was one hell of a race to remember. Apart from Lamborghinis, Teslas have been racing the Ferraris as well, like recently we witnessed a Tesla Model 3 Performance vs. Ferrari Portofino drag race battle — there are many more Tesla victims to come in the near future, stay tuned.