The world had a divided opinion on Tesla (TSLA) when the original Roadster was launched more than 13 years ago, then when the company’s first family-sized sedan Tesla Model S went into production in 2012, and now when the 2022 Tesla Cybertruck is unveiled, the world is even more divided, the difference is no one now argues over if Tesla is going to exist in a few years, that narrative had just died.

Today the argument is ‘if the Cybertruck is going to be acceptable to the masses or not’, now Tesla has transitioned from a small electric vehicle manufacturer to a trendsetter within a small 10-year timeframe — a major factor ‘radical thinking coupled with weapons like advanced engineering, creative design, Autopilot/FSD software’.

@TeslaPodcast which is a daily Tesla podcast crunched some numbers comparing the 2012 Tesla Model S Performance vs. 2022 Tesla Cybertruck‘s price, cost of range per mile, efficiency, and other metrics to show us how much the Silicon Valley-based automaker has improved in lowering the cost of producing the best electric vehicles in the world. 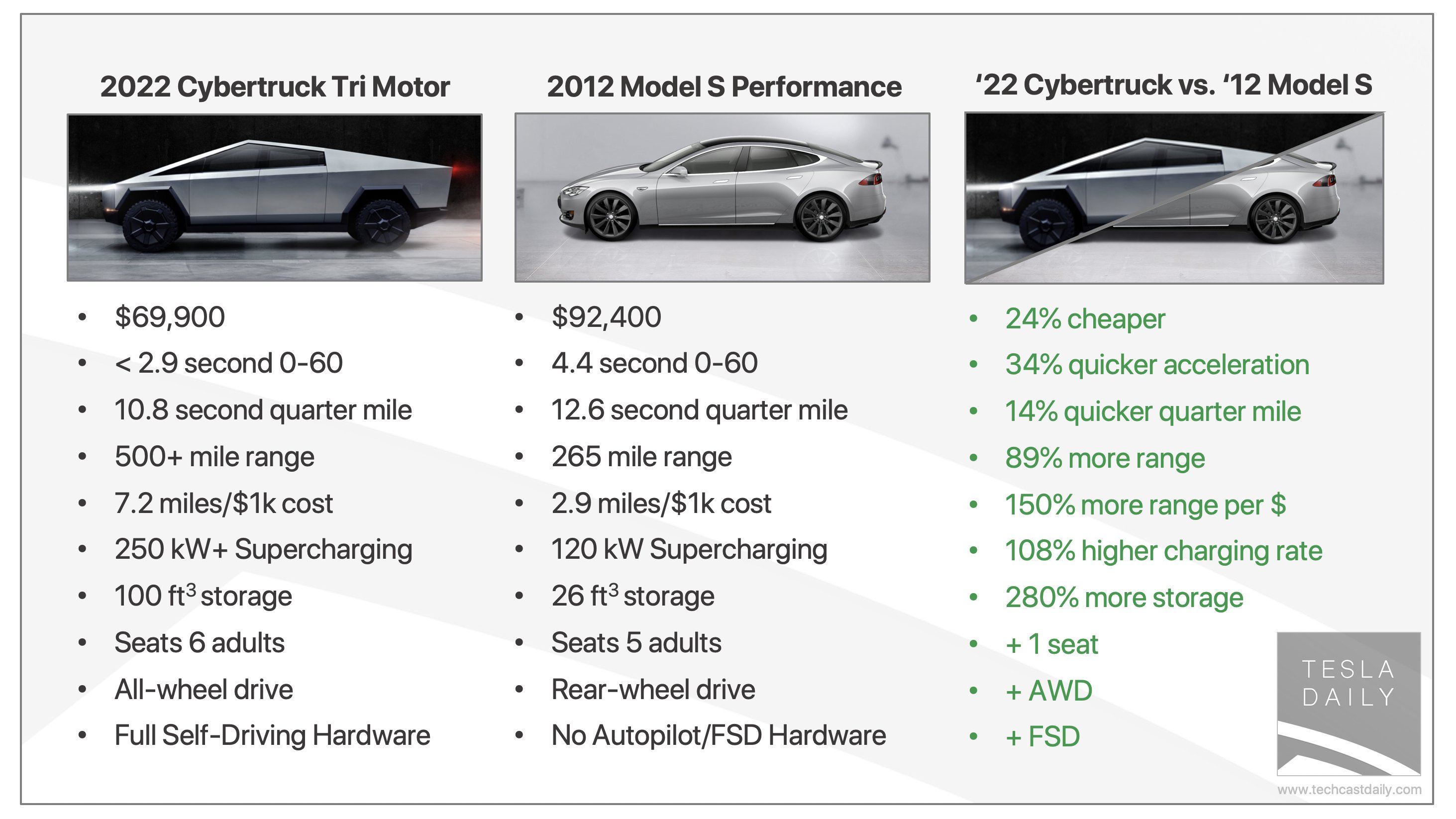 Above: 2012 Tesla Model S vs. 2022 Tesla Cybertruck in terms of price, cost, and range improvement (%) over a period of a decade (source: Tesla Daily Podcast).

The 10 year Tesla revolution has given us many times more options and perks for a ~24% cheaper price tag, Tri-Motor All-Wheel-Drive vs. Single Motor RWD, 0-60 mph from 4.4s to less than 2.9s, Autopilot hardware with 8 cameras, 12-ultrasonic sensors, 1-forward radar that is capable of delivering FSD features like Smart Summon and beyond.

Charging speeds have been a factor in the wide adoption of electric vehicles but with the introduction of Tesla’s V3 Supercharging, Tesla has reduced charging times phenomenally as we saw in a recent test which shows a Tesla Model 3 can charge from 0% state of charge (SOC) to ~50% SOC or in other words 150 miles of range added in just 11.5 mins, just a little bit more wait than on a gas station (if there is no waiting line of course and you cannot refill gasoline at home).

We get more power, more acceleration, more durability, advanced battery tech, free software updates, and more for a lower price, all in just 10-years of production — in the end the critcs can only argue about how polarizing the Cybertruck’s design is, wait till it becomes the norm.