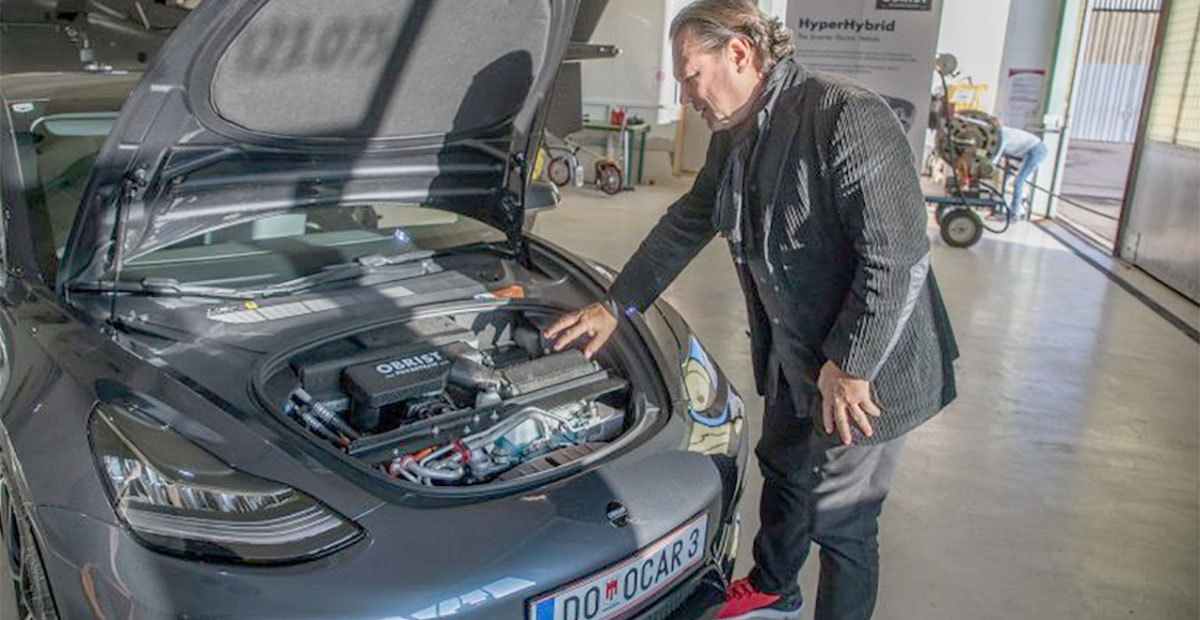 An Austrian engineering firm named ‘Obrist Powertrain’ has taken a Tesla Model 3 electric car and inserted an engine in the front trunk (frunk) — this small 2-cylinder petrol/gasoline engine acts as a charger when the battery pack needs it.

Obviously, Tesla fans from around the world are not happy about it when they look at this mutation of the car that is the embassador for environmental sustainability but according to the company who did this has another point of view. Founder of this startup Frank Obrist thinks that with this technology which he calls ‘HyperHybrid’ the car can easily go over 1,000 km (621 miles) on a single charge.

Another argument this company has in favor of their custom powertrain is that electric vehicles might also proliferate in markets like Asia, Africa, and Latin America where Tesla Supercharger network is non-existent or other charging options are very limited. Having such a mobile charging device onboard can come handy on a long journey or while adventuring into the wilderness.

I don’t want to live on this planet anymore https://t.co/SDzIkRWLiP

This small engine that acts as a generator is not connected to the vehicle’s drivetrain, rather Obrist has removed the ~50 kWh Model 3 Standard Range Plus battery-pack and installed a much smaller 17.3 kWh pack to lighten the vehicle and enable quicker turnaround for a full battery charge. The generator starts charging once the car reaches the speed of 65 km/h (40 mph) and efficient enough to run 100 km (62 miles) with only two litres of petrol (0.5 gallons).

However, this Tesla Model 3 conversion is just a test prototype (called the Obrist Mark II) — Obrist Powertrain is in the works of launching their own car by 2023 and claims to have deal underway with a major market player in bringing their HyperHybrid cars to market in the next few years.

According to Obrist, this patented range-extending setup is the answer to BMW i3’s Rex (Range Extender) technology, the company thinks that their way of extending the range of an electric vehicle is far more superior than the BMW’s. Frank Obrist’s’ thoughts are reflected in the following excerpt from edison.media’s German article (Google translation):

The energy management system, which works much more efficiently than in other vehicles with a serial hybrid drive, is also patented. This also applies, and in particular, to the version of the BMW i3 with a range extender that Bavaria has been offering until recently . Comparisons with the car quickly upset Obrist: “The Range Extender already contains everything that is fundamentally wrong by engineers. Why should I buy an electric car that makes a conventional combustion engine do all the work when the battery is empty? ”With all the noise, vibrations and emissions that go with it.

In Obrist Mark II, the combustion engine is not an auxiliary engine that jumps in when the battery is at the end of its strength. With the concept of the Austrians, the generator jumps in when the car is driving at speeds of over 65 km / h – not to direct additional forces onto the drive axle, but to gently recharge the battery. “What all today’s batteries are least capable of is fully charged and completely discharged. After maybe 500 charging cycles, the battery therefore only has a capacity of 80 percent, ”criticizes Obrist. With his system, the battery is always recharged a little in-between – “chemistry can convert ten times more energy.”

Tell us in the comments section below if this technology has a future or is it just the dream that will never come true.