All you want to know about the Tesla V10 software update (release notes, video demos, more)

The next major software update named Version 10 (V10) to Tesla vehicle fleet has started to emerge in the cars of the Early Access Program (EAP) members — the V10 firmware update is jam-packed with new and enhanced existing features, (detailed release notes below).

One of the major new features is the ‘Tesla Theatre’ option placed next to the existing ‘Arcade’ mode, Tesla Theatre now contains the most awaited Netflix, YouTube, and Tesla Tutorials — it is a big leap forward for Tesla owners by being able to enjoy another entertainment option besides just video games.

However the beta release notes for the V10 software update state that Tesla is introducing ‘some of the new features which will be available in the final release’, so we can expect that there will be more features besides these that are deployed for testing and feedback purposes.

A few months ago at E3 2019, Elon Musk showed the upcoming video games to Tesla vehicle fleet, one of them was the classic Cuphead, although due to storage limitations, the game will have limited stages/chapter but still an interesting addition after the latest game of Chess.

Cuphead is a classic run and gun action game inspired by cartoons of the 1930s and heavily focused on boss battles. For the Tesla Edition of Cuphead, enjoy the game’s full first Isle as you play as Cuphead or Mugman (in single-player or in local co-op). Traverse strange worlds, acquire new weapons, learn powerful super moves, and discover hidden secrets while you try to pay your debt back to The Devil!

As with all Tesla Arcade games, your car must be in PARK to play. To access Cuphead tap the Application Launcher, tap Entertainment icon > Tesla Arcade, then select it from the menu. Note: A USB game controller is required to play Cuphead. Game controller behavior may vary depending on make and model.

Entertainment seems to be the focus with the Tesla V10 Software update, as Tesla expands upon the options to have fun while the vehicle is parked or charging, besides having lunch, a good way to kill 15-30 mins at a Supercharger station while the juice is flowing to the car’s battery.

These are the release notes for Tesla Theatre in V10 early access update:

Tesla Theater lets you watch movies and videos when your car is in PARK and connected to Wi-Fi. To launch the Tesla Theater, tap the new ‘Entertainment’ Icon in the Application Launcher and select the Theater tab.

All Electric YouTube channel have tested this update on a Tesla Model 3 which has the 2019.32.2.11 firmware version on it, the interesting thing is that the YouTube app on the car is as smooth as it runs on a smart TV or a tablet, looks like an app directly created by Google — let’s check out the demo.

Another new fun update in the V10 Tesla software release, the notes explain it as follows:

Sing karaoke to your favorite songs and artists in your car. You can select Caraoke from the Media menu. Tap the microphone icon to adjust whether the vocal track plays while you sing along. Note: Displaying the karaoke lyrics requires the car to be in PARK.

The new and improved Tesla driving visualizations on the center touchscreen for the Model 3 and instrument panel of the Model S and X have a better rendering of the vehicle and improved graphics all around, also the lane change indication display is enhanced in this new update.

Last month we reported the new driving visualizations that started appearing on EAP Tesla vehicles, the Model 3 visualization now can even be zoomed-in and rotated for a better view on the rear traffic for a short time span.

The driving visualization has been improved to display additional types of objects and lane lines around your car in more environments.

Additionally, you can drag and pinch the driving visualization to temporarily adjust view angles and zoom. After a short of inactivity, the visualization will return back to the default position.

The Auto Lane Change also known as Navigate On Autopilot feature has been around in Tesla cars for a while now, this driver assistance feature mainly aimed at highway driving is now going to receive a better lane change animation/visualization, we posted two videos of day and night time visualizations in a report last month.

The V10 early access notes define this new feature as: 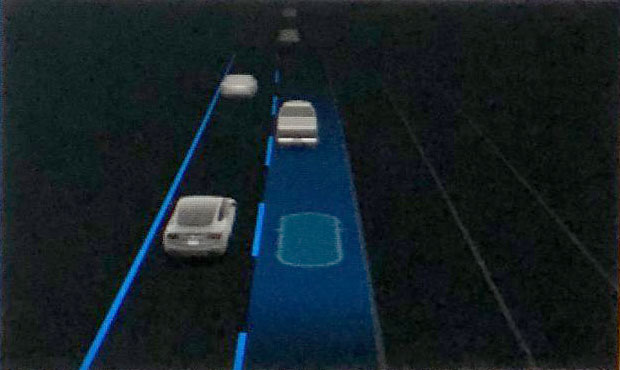 In addition to the ‘Home’ and ‘Work’ locations now Tesla Model 3, S, and X owners can use the  ‘Navigate’ feature to explore a nearby adventure or food location, if you’re not going home, you’re either feeling hungry or lucky, right!

V10 release notes on the feature:

Feeling lucky or feeling hungry? Go on a surprise adventure to a nearby attraction by tapping Navigate > Lucky or get directions to a local restaurant chosen by your Tesla by tapping Navigate > Hungry. We have also updated the place pop-up to include easy access to a website associated with the location if one exists.

Tesla claims to have made maps much improved and now it is easier to navigate to the desired location, the release notes on this feature define it as follows:

We have improved maps to make it easier to find and navigate to where you want to go. When searching for a destination, the autocomplete search now includes the distance to each suggested place. Also, you can now directly tap the labels on the map to quickly view the associated place details and navigate to that destination.

To explain a detailed view, Tesla has shown the Area 51 as the example location and named it ‘Area 51 Alien Center’ to poke fun at the recent social media campaign to find aliens from this ultra protected location of the US government.

Now you can even submit the rating and review of a location in the Tesla Maps by clicking the ‘Star’ icon.

Tesla made several improvements to the car safety and security feature Sentry Mode earlier this year, now the automaker brings improvement to the recorded video clip storage by using the space on the USB drive efficiently, the company details the new enhancements in the V10 release notes:

Sentry Model video clips are now saved in a separate folder on your USB drive to make them easier to review and manage. Also, the older Sentry model video clips will now be automatically deleted if there is not enough space on the USB drive, and Sentry Mode clips are using more than 5 Gigabytes of space.

The new Joe Mode is designed to reduce the disturbance inside the cabin created chimes when enabled the volume of the chimes will be reduced, we expect this will not affect the Autopilot nags reminding the driver to put their hands back on the steering wheel.

The Silicon Valley-base automaker writes in the V10 release notes:

In the 2019.16 subversion firmware update earlier this year Tesla brought improvements to the software update process that reduced the wait times for Tesla owners in getting the latest version of the software, now it further tweaked a little as stated in the following V10 release notes:

The icons/options in the new Application Launcher are re-ordered for easy access to the phone, also the Tesla Arcade is now renamed to ‘Entertainment’ where both the games and the video streaming apps live side by side (see above for reference).

The application launcher has been reordered to make it easier to launch the Phone App. We have also replaced the Tesla Arcade with Tesla Entertainment.

The following screenshots are a courtesy by Tesla Owners Online discussion forum, where the debate on the Tesla V10 firmware update is heating up.