The question of how much battery capacity will be lost over time and with a certain number of miles accumulated on the odometer comes to mind of every potential and new Tesla and electric vehicle owner, we have some data and evidence from existing Tesla Model 3 owners which can help find the answer.

Earlier this year Tesla CEO Elon Musk stated that the Tesla Model 3 drive unit and body is created to last 1 million miles and the battery of the car has a minimum lifespan of 1500 charge cycles that would translate to 300,000+ miles (standard range/standard range plus) to 500,000 miles (long-range variants).

Model 3 drive unit & body is designed like a commercial truck for a million mile life. Current battery modules should last 300k to 500k miles (1500 cycles). Replacing modules (not pack) will only cost $5k to $7k.

The Math in Elon Musk’s above tweet is simple:

A charge cycle is when you have used the 100% of rated battery capacity, it is not necessary to deplete the battery from 100 – 0% in one go — we can understand a charge cycle by a simple example, let’s assume you have driven your car 120 miles today (50% depletion on SR+) and plugged-in for the night and charged it to 100% and you went on a 120 mile road trip the next day, using 50% of the battery again — this will be counted as ‘one cycle’ according to Apple Inc.

According to the US Department of Transportation Federal Highway Administration, Americans drive an average of 13,476 miles a year, that means reaching 300 – 500k miles is quite a task for the average Joe (see table below for detailed breakdown by age and gender).

The highest mileage Tesla Model 3 is owned by Raymond (@4NoGas/Twitter) which has 71,817 miles (115,578 km) racked up on the odometer which means even the highest mileage Model 3 is too far from losing a significant amount of battery capacity that requires new cell modules to be installed.

@TeslaMiles/Twitter gathers data for the highest mileage Teslas driven, known as the ‘Tesla High Mileage Leaderboard’ — the 76 highest mileage Model 3s on his list have a combined mileage of 2.9 million miles which translates to an average of 39,372 miles driven for each car.

https://t.co/HwWQ5RnUoY
Has been updated, and the future minimum mileage for the @Tesla Model 3 will be 25,000 miles! pic.twitter.com/qSyA8RiYDg

Matthew from the Tech Forum YouTube channel is one of the toppers on this list and he has shared his thoughts on how much battery degradation he has seen in his Tesla Model 3 after driving for more than 50,000 miles.

So Matt lost around only 2% of the total battery capacity after completing his first 50k miles, as he mentioned in the video the first 50k miles battery degradation is the biggest hit, afterward the drop in lost capacity is consistently low — as we saw in the table above, it takes around 3.7 years for an average person to drive 50,000 miles that means Tesla’s 100k – 120k warranty covers 6-8 years for a normal driving pattern.

The best a Tesla owner can do from his side for gaining the max life out his car’s battery is to maintain an optimal State of Charge (SoC) that eventually falls in between 80% to 20% in a daily routine, occasionally going up to 90%+ or below 5% is not bad for the health of the batteries as Elon Musk suggests:

Teslanomics has done some substantial research in Tesla battery degradation using data from 2600+ vehicles which include Tesla Model S, 3 and X, looking at the graph it is clear that most of the Tesla vehicles retain above 90% battery capactiy after 100k miles, some of the cars (small blue circles in the graph) showing early degradation, most probably have a software bug or need to recalibrate the battery.

Recalibrating sometimes is simply done by depleting the battery to a 10-20% SoC and then re-charging it and sometimes the car needs to be taken to the Tesla Service Center for expert assistance, as happened in the case of a Tesla Model 3 Performance owner (full story below on how he got this issue fixed). 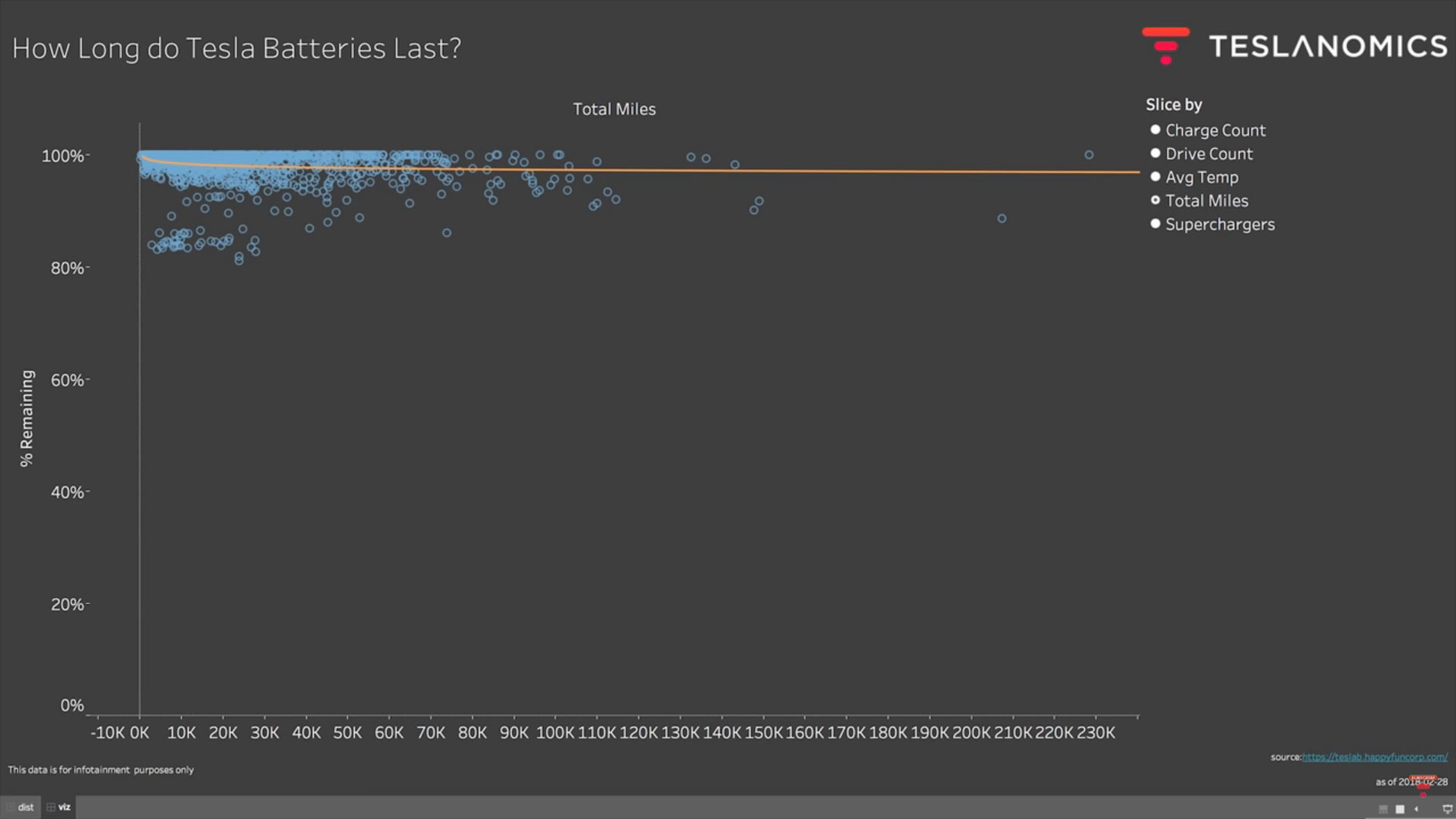