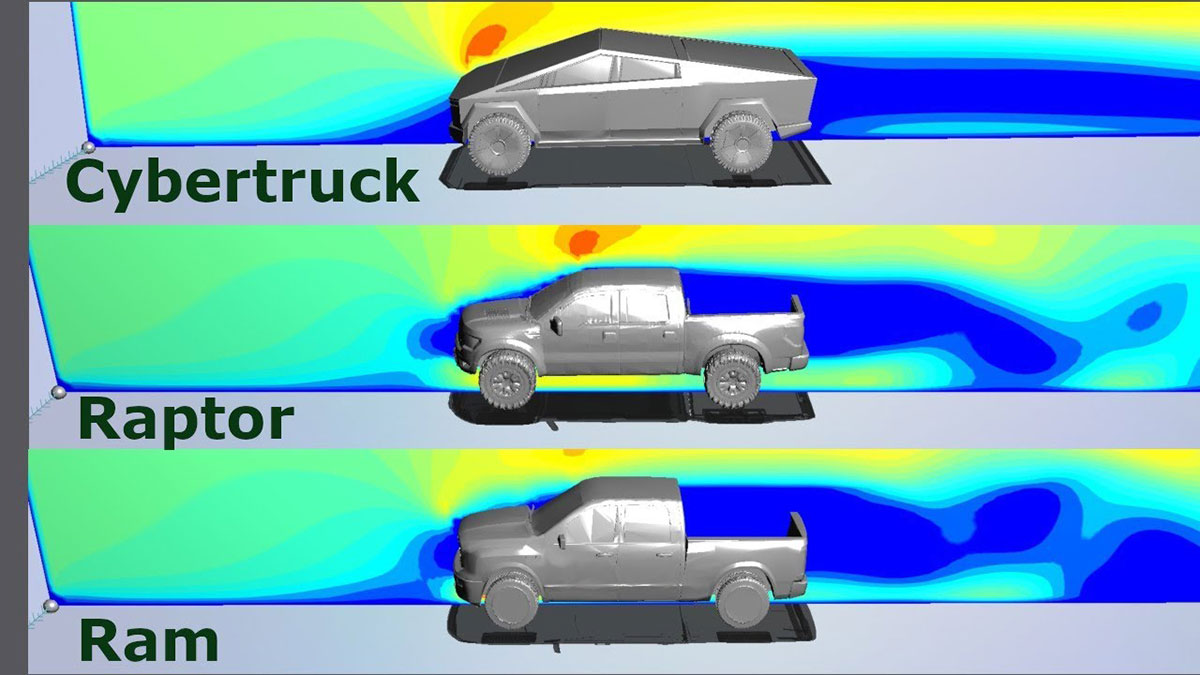 Tesla Cybertruck’s angular shape raises the question of how aerodynamic can this futuristic pickup truck can be? A YouTube channel ‘Boats and Engines’ tries to calculate the Cybertruck’s coefficient of drag (Cd) by using the 3D model of the truck and simulating the CFD (Computational Fluid Dynamics) of it in software.

In the first video, the calculation of the Cybertruck coefficient of drag is calculated, the next video, later on, uses the 3D models of a 2016 Ford F-150 Raptor and 2019 Dodge Ram pickup trucks are tested through the same conditions in the simulator to compare the Cd of all three candidates.

For reference, Tesla’s most aerodynamic production car is the Tesla Model 3 with a Cd of 0.23 — Next-gen Tesla Roadster is expected to break all aerodynamics records for a production sports car, officially no drag coefficient for the 2020 Roadster is announced yet.

Ford and Dodge have always been reluctant to release official drag coefficient numbers for their pickup trucks, like the Cybertruck simulation above, F-150 Raptor and the Ram achieve an estimated Cd figure. These tests are performed on a single computer and single GPU vs. the car manufacturers having a vast amount of computational resources, the results are not 100% accurate here, but they still give us an idea of which truck among the three is the most aerodynamic.

This is all that we have got in the public domain to rely upon for the aerodynamics of all three trucks, we will have to rely on these estimated numbers until official figures are announced by these automakers, at least Tesla should release that information.

Interestingly most people thought that the triangular roofline of the Cybertruck is a hindrance for the airflow but looking at the simulation it is not big of a deal, however the shape of the front fascia is blocking the most air in the entire body of the Cybertruck.

The sliding top bed cover of the Tesla Cybertruck enables smoother airflow as compared to the Ford F-150 and the Dodge Ram trucks lacking the feature, even if the traditional pickup trucks had a bed cover it would have been flat not like a slope on the Cybertruck, kudos Tesla.

Shouldn’t you be comparing the drag force of the three vehicles? The drag coefficient could be higher for a car and still produce less drag if its area is smaller.

do you have any idea how much of the coef. of drag comes from the frontal area vs the tail gate on the cybertruck?
Does the turbulence behind the truck contribute much to the overall coef. of drag?