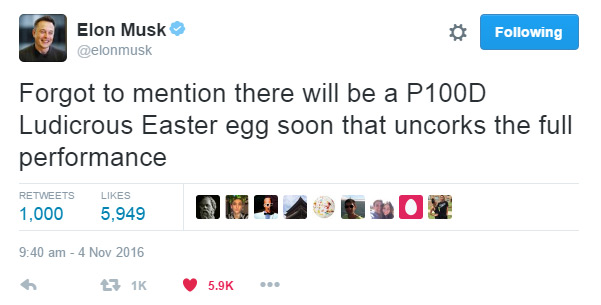 Untill yesterday Tesla enthusiasts and owners have been guessing what the Easter Egg holds for them and Elon Musk revealed it. The software update rolling out in December will give a performance boost to P100D models including both Model S & Model X.

From this upgrade expected to release next month Model S P100D with Ludicrous mode will be able to achieve 0-60 mph (0-100 km/h) in a meager 2.4 secs. This is kind of a world record for a mass production vehicle until now. Also in the quarter mile drag Model S would be able to finish in 10.6 seconds according to the following tweet by Elon Musk yesterday. 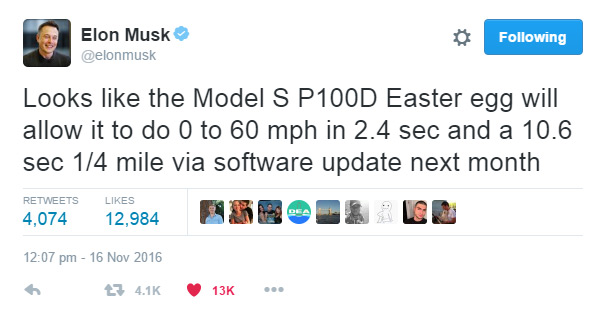 Let’s take a look at the following table for the world’s quickest cars. Although most of these Super Cars cost more than the Model S P100D they couldn’t outperform Tesla’s masterpiece, it’s big time for big players to think seriously about their future.

You can explore more about the world’s quickest cars on Wikipedia here.

This summer a video made headlines in which Model S P90D Ludicrous was beaten in a quarter mile drag race by the Rimac Concept_One. I think this will not be the case with P100D at least after December’s software update.

In a recent video (below) by Drag Times we can see that Model S P100D does 0-60 mph in just 2.5 seconds, which is already amazing.