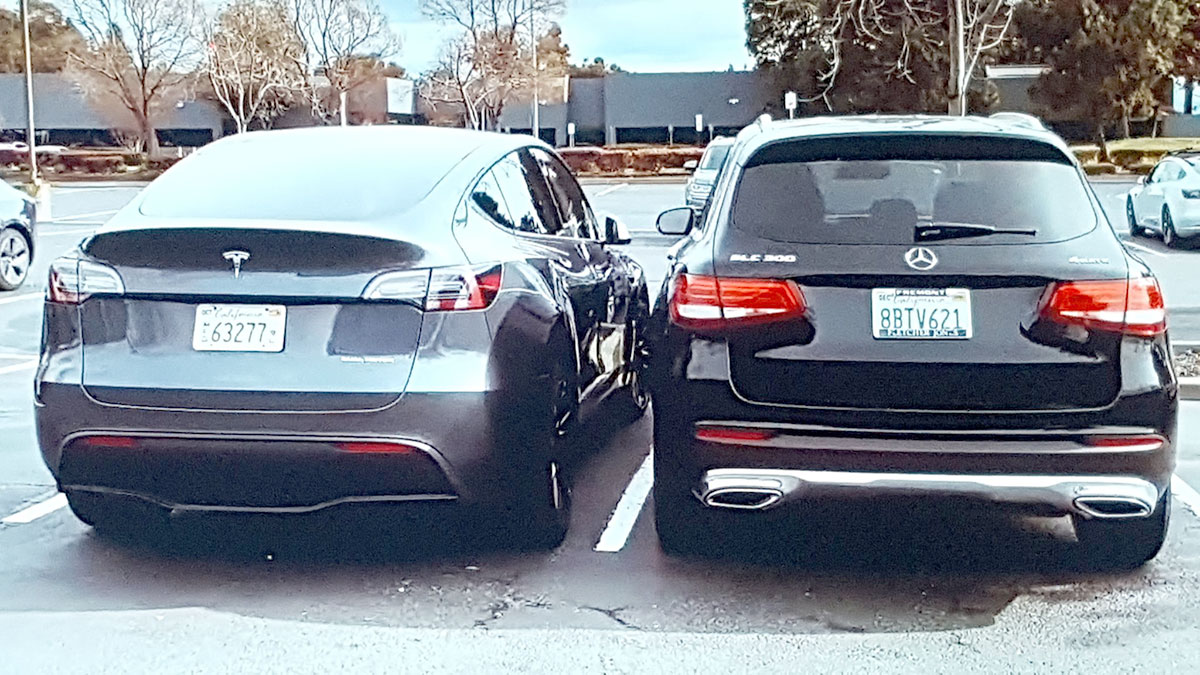 Tesla Model Y and Mercedes Benz GLC 300 Midsize SUV are recently spotted at the Tesla Fremont car factory’s parking lot, both SUVs were parked pretty close-together and Teslana/YouTube grabbed the opportunity to film them from several different angles, the rear one we can see in the featured photo above.

Interestingly, we can witness several internal combustion engine (ICE) cars and SUVs at the Tesla Fremont parking area, the ICE age is going away but it looks like even employees and visitors at Tesla haven’t got rid of them completely but soon that will change with affordability coming into play.

Mercedes Benz on its US website classifies the GLC 300 as ‘midsize SUV’ and by the visual appearance of it beside the Tesla Model Y shows it is a bit less wide than the Model Y and the height is a bit rising above the Y’s roof.

Like previously we compared the exterior dimensions of the Volvo XC90 vs. Tesla Model Y, we are going to do the same comparison using the leaked specs by the Tesmanian blog — the difference is we’re going to compare the interior dimensions of both of these direct competitors as well (see table 1.1 and 1.2 below).

The exterior dimensions numbers in the 1.1 comparison table suggest that the Tesla Model Y is actually slightly wider and longer than the GLC 300 SUV, except that the roof of the Merc GLC 300 is a tiny bit higher — if the GLC 300 is a midsize SUV, Tesla Model Y definitely falls into this category, let’s see how both cars compare in terms of interior dimensions and space.

Tesla Model Y is roomier inside than the Mercedes GLC 300, both in terms of the headroom and legroom, Mercedes was only able to create a little bit more shoulder room for the passengers in the front and rear seats, the max cargo, and passenger capacity of the Model Y is also significantly more than the GLC 300.

We have done visual comparisons of the Tesla Model Y and Model 3 in the past using pictures and videos of the front, rearview, and side view profiles but since the dimensions of the Model Y are out, we will be doing a detailed specs comparison of both these vehicles soon.

Seems unlikely bordering on unbelievable that cabin room AND luggage space can be bigger in the Tesla (luggage even significantly), considering the almost identical width/length and the roofline of the Mercedes allowing significantly more internal cubic space.

How was the interior measured, and what are your reflections on this obvious paradox?

@Xmkv: You can do amazing things when you don’t have to cram in things like engines and transmissions and fuel tanks. All that extra space translates to extra interior and storage space.

Model Y dimensions had leaked last week as described and linked in the article!