According to reports Elon Musk is in Germany right now, Tesla/SpaceX CEO embarked Europe on his private jet Gulfstream G650ER which finally landed in the German Capital ‘Berlin’ — this happened at the same time when Falcon 9 was preparing to send 60 Starlink satellites to the orbit on Monday.

Although the launch and satellite delivery was successful without Musk being present on the occasion, it is rare that the passionate CEO misses these events, it must have been something more important in his list of to-dos then the SpaceX Falcon 9 launch.

Landing in the German capital is speculated to be pointing towards the possible contract signing or MoU between Tesla and the German Government for the Gigafactory 4 Europe location. Elon Musk stated in the Tesla Q3′ Earnings Call last month that the location of the Gigactory Europe will be announced before the end of this year.

Friend of our website Morten Grove successfully tracked Elon Musk’s private jet and continuously monitored its location to give us the tip for this news piece, here are some tweets from the tracking activity earlier on.

The Falcon has landed! (not the rocket, that's later! The plane, it's own by "Falcon Landing LLC" that's a SpaceX company) pic.twitter.com/xMTF2XUb2y

Thats no surprise at all.

Its about Government support & that needs to be negotiated.

Merkel owns a PhD in Physics so they will understand each other & she is pragmatic.

Having GF4 in 🇩🇪 is the best way for Merkel & Altmaier to wake the German Auto industry up.

2019 was the year when ‘Elon Time’ came as close as possible to the real-time and things he announced late last year like the Model Y reveal and estimate production start time and the Gigafactory 3 China have come to fruition, unexpected by many.

We can expect the announcement of the Gigafactory Europe location before the holiday season jumps to full swing, this will give the disclosure much more mainstream media coverage and even boost the Tesla (TSLA) share price a bit, hopefully.

The following picture from Koopman Car Terminal at the Port of Amsterdam shows why Europe needs its own Gigafactory, according to sources, the number of Tesla Model 3 cars seen in this picture are just 1/10th of all present at the port right now.

Seems like after Norway, Netherlands has gone crazy over Tesla Model 3 — besides the Model 3, Gigafactory 4 Europe will also be producing the eagerly awaited Tesla Model Y compact SUV like the Gigafactory Shanghai, Tesla’s shipping pains will substantially be lowered by opening a Gigafactory in this region, Germany has been the favorite of Musk due to its strategic location. 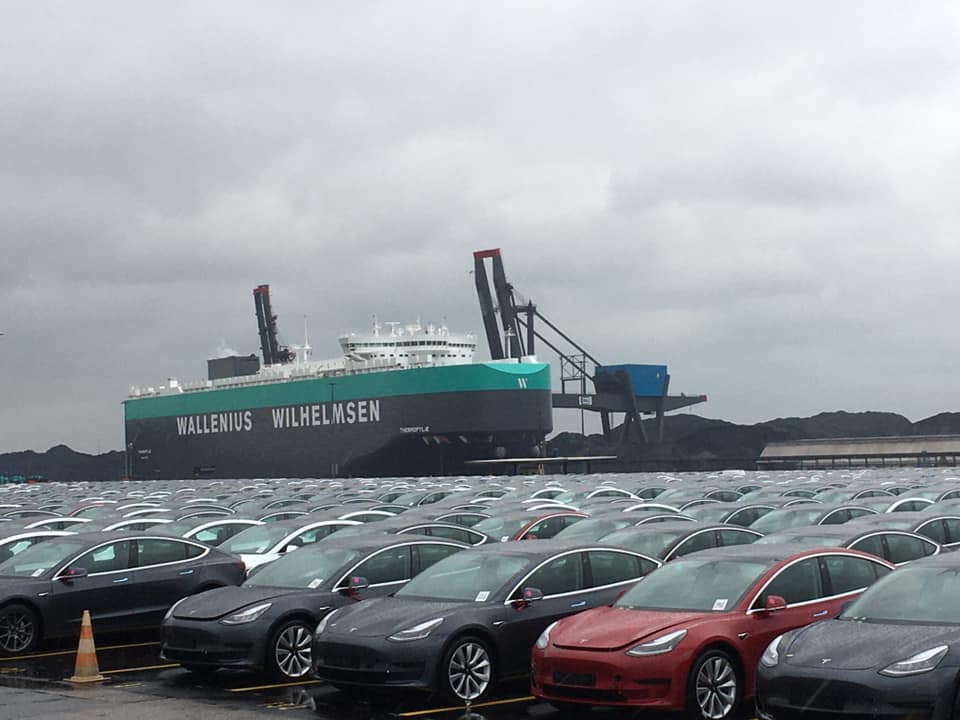 Above: Thousands of Tesla Model 3s waiting for deliveries at the Koopman  Car Terminal at the Port of Amsterdam. Photo Credit: Adriaan Van der Schaar / Facebook