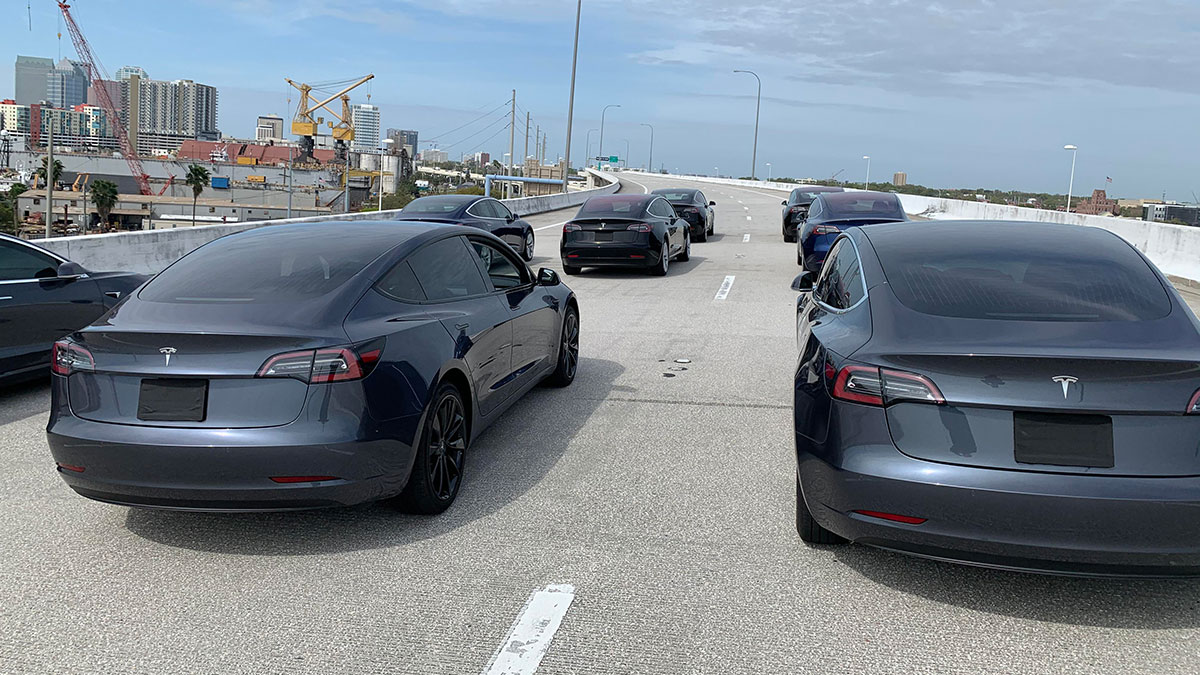 Tampa, Florida — one of the expressway bridge was temporarily shut down to film a unique documentary — a fleet of autonomously driven Tesla Model 3s, one of the volunteers of the project and Model 3 owner Blaine Johnston posted the story on Reddit and provided us some extra stunning pictures of the event (photo gallery below).

The makers of the film is a Tampa, FL based creative studio ‘Diamond View’ — Mr. Johnston gave some details of the film shooting that took place in the middle of the day last Tuesday when the traffic on this path is minimum, he posted:

There were 9 Tesla Model 3s there for a 3×3 caravan of “autonomous” Model 3s. It was filmed by a drone and camera truck with a boom camera. Officially, the shoot was for an upcoming documentary about the future of transportation in Tampa. Unofficially, it seems like a pretty big production for that, but maybe these guys just go big, and it was fun to be a part of.

Some of the details and pictures of the event were shared by a local film and digital media commission in the following tweet:

Earlier today @Diamond_View filmed a commercial using the Lee Roy Selmon Expressway downtown. The ᴇɴᴛɪʀᴇ highway 👀 Thank you for inviting us and the @TampaEDC to the set 🎥🚗 #filmtampabay pic.twitter.com/ltI5IZ26Fe

Looking at the above pictures, it seems like most of the Tesla Model 3s are in black color but according to the photographer, there are at least two cars in blue and I am able to see one in Tesla’s signature midnight silver metallic (gray) color.

The purpose of the filming was to record the Model 3 cars moving without the driver input but according to Blaine they did not use FSD for the filming but only used the Autosteer and the Traffic-Aware Cruise Control (TACC) features only, Tesla Full Self-Driving (FSD) still seems to be few more years away into the future.

Reportedly, Diamond View is working on a long-term documentary project named ‘Building Tampa’, this multi-episode documentary focuses on various aspects of Tampa city’s rise as one of the most forward-looking cities of the United States with its rich history, arts, culture, and nightlife.

Florida is probably one of the most densely populated states when it comes to the number of Tesla vehicle owners, the east coast state is also home to one of SpaceX’s launch site, the Kennedy Space Center from where Elon Musk’s rocket company is preparing for the 6th Mission of the Falcon 9 Starlink launch later this month.

Let me give it up for Tesla for a job well-done with EVs. The Tesla EVs is in a class of its own, looking at the present state of the art of EVs. However, I know that the EVs is still at its early stage, but I believe Tesla will need to step up the more if there’s a plan to go global not continental. I strongly believe there’s more to do to maintain or exceed this present class. If these questions below will have adequate answer, then Tesla is good to go. 1. how many companies have made it… Read more »