For faster deliveries to the UK & Europe, Tesla is moving Model 3s to the Port of Philadelphia

A large number of Tesla Model 3 vehicles is reportedly being moved from the Tesla HQ in Palo Alto, CA to the Port of Philadelphia (PhilaPort) to ensure faster delivery times for Europe and the UK — the most recently spotted car carriers loaded with Model 3s had mostly the right-hand-drive variants on them.

Morten Grove who constantly tracks vehicle transport vessels shipping Tesla cars worldwide, sourced a word from a Tesla Model 3 car carrier driver that most of the RHD Model 3s are now being moved to the PhilaPort.

The reason is obvious, Tesla (TSLA) is aiming faster deliveries to the European and RHD markets that receive deliveries via the Port of Zeebrugge, Belgium i.e. the United Kingdom and Ireland for the 3rd quarter in an attempt to surpass the Q2, 2019 delivery figures.

Although the reported cars are all RHDs, there is a strong reason to ship to Europe/UK from the east coast rather than the west coast/Port of San Francisco.

With the help of the following illustrated map, I have attempted to explain how much the sea voyage length can be shortened delivering cars from the Port of SF vs. the Port of Philadelphia. 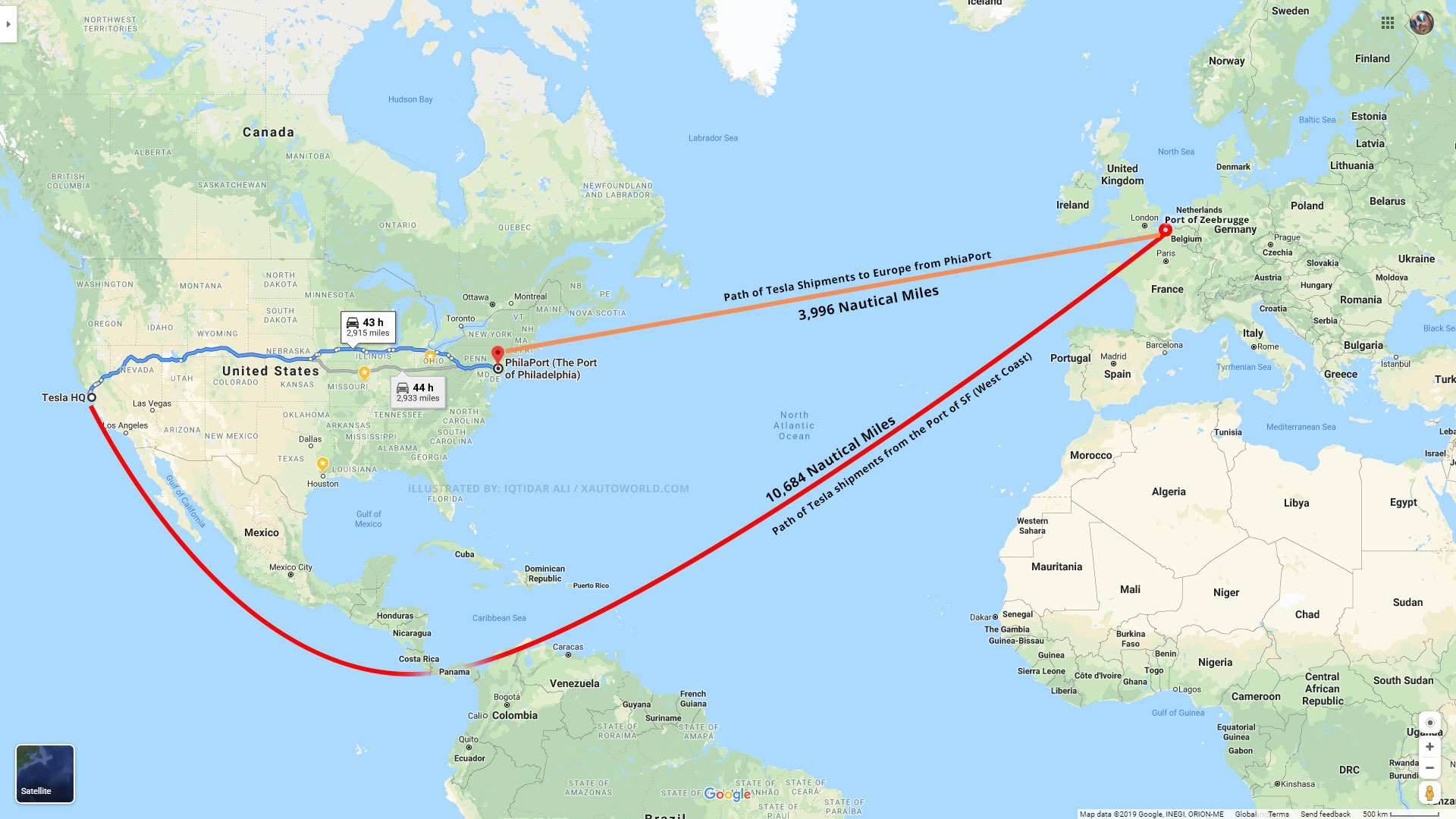 The distance between the Port of SF and Port of Zeebrugge is 10,684 nautical miles and currently one ship named the ‘Glovis Cosmos’ is headed from US SFO to BE ZEE with a Tesla vehicles shipment, the total days estimated days of the time at sea is 24 days (check status at marinetraffic.com).

According to ports.com, the distance between the Port of Philadelphia and Port of Zeebrugge is only 3,996 nautical miles and if a ship travels at the speed of 18 knots, the time to reach the destination will be 9.3 days — as we can see in the above map, it takes maximum two days to reach Philadelphia from the Tesla Fremont in California.

Adding max 10 days at sea and 2 days on the road, it will take around 12-15 days in getting the cars from the Fremont factory to Europe/UK as opposed to 24-30 days to deliver cars via the Port of San Francisco — this is a huge advantage of time Tesla will gain in their overseas deliveries, a smart move by the automaker to pump up delivery numbers for the Q2.

Tesla must be also be benefiting on the financial side by using this strategy, the shipping cost of 10,684 nm vs. 3,996 nm should also be reduced by at least 50% on the sea, including the car carrier costs the overall savings should still be considerable.

However, till the last reports, the Port of San Francisco also had thousands upon thousands of Tesla Model 3s waiting at the Pier 80 to roll on to vehicle transport vessels and we got some super nice aerial photos of the scene.

Update: Now several sightings by Tesla owners prove that Tesla is moving massive amounts of Model 3s to the PhilaPort/East Coast, a single Tesla owner spotted around 30 car carrier trailers loaded with Model 3s on his way to Wyoming.

30 trucks spotted heading east in one day! The idiot $TSLAQ #SGF has completely whiffed on this one. Right under their noses. 🤦‍♂️

I’d be shocked if shipping via East Coast to UK is cheaper… I’d expect the railroad cost across the USA is as much as the ocean voyage via the Panama Canal costs. West Coast to Europe in a RoRo vessel is probably a very weak trade route and the carrier would delighted to get a few thousand cars to cover fuel costs because Europe probably exports millions of cars more than it imports.

I agree, but getting the exact cost of shipping to the east coast from the west is difficult, also according to an update from earlier this year (https://www.teslarati.com/tesla-car-carrier-hauling-trucks-trailers/), Tesla might be the owner of these trucks and car carriers which might have reduced the cost significantly!

Time margin is also important for Tesla to push for max sales in the Q3 in order to supersede Q2 sales!

Why not ship them directly from PhillaPort to the UK instead of via Zeebrugge?

Probably due to the EU VAT tax applied if the cars are not “completed” in the EU in the NL. They look quite complete to me.

Also because there are around 200 destination chargers installed at the Port of Zeebrugge to instantly pump life to the batteries that have not been charged for a few weeks(charger pics here: https://www.xautoworld.com/tesla/model3-disruption-europe/) and Tesla has a long term contract with BE ZEE!